This concept encompasses a vision for the economy of northern Australia that “is underpinned by Indigenous people's knowledge of their country, all of its values and their customary obligations to continue managing their country for future generations” (Morrison in Browning 2006). Figure 1 below represents this idea as: 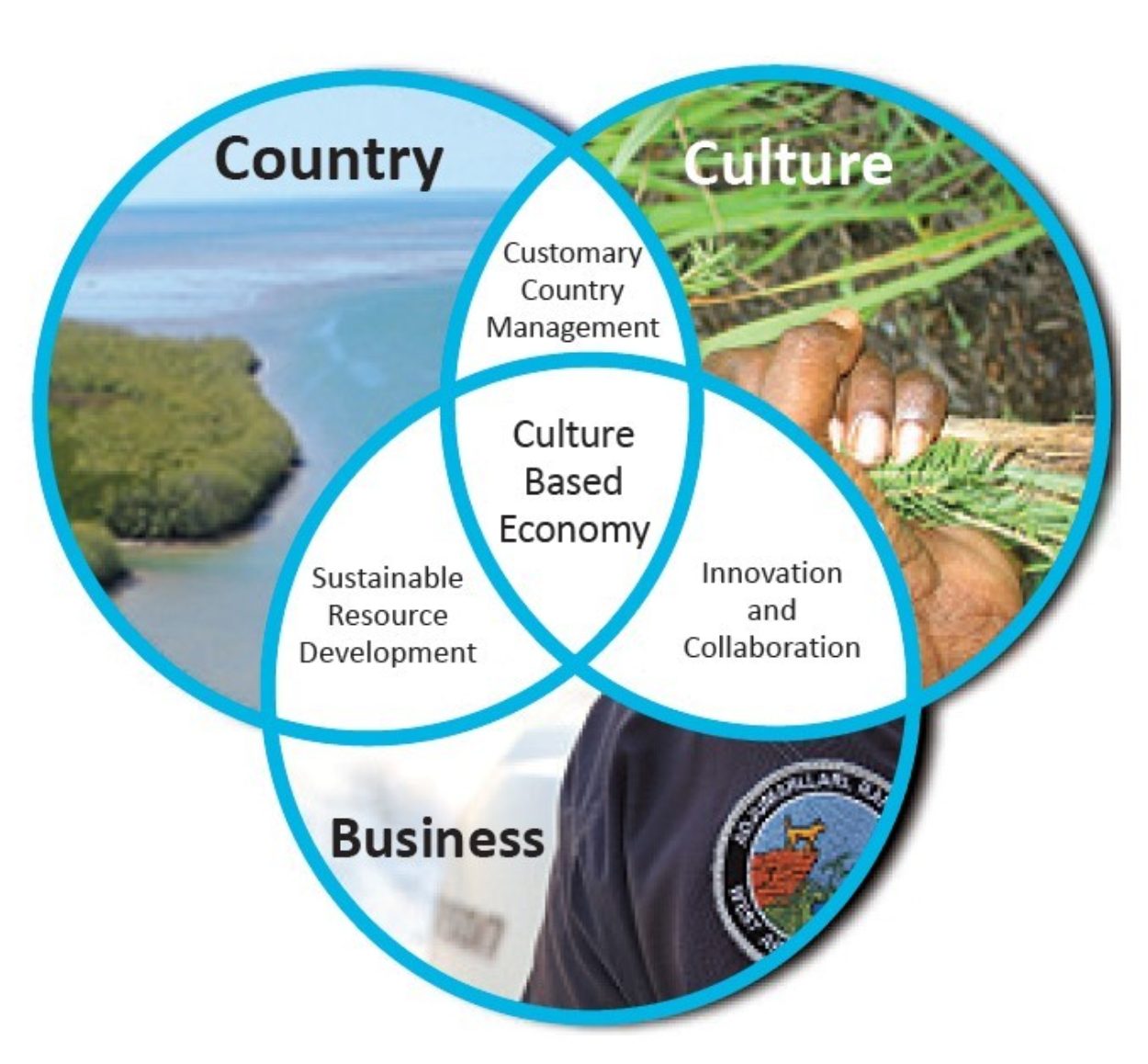 The idea of a culture based economy has been described by NAILSMA’s former and founding Executive Officer, Joe Morrison, as follows:

The culture-based economy from our point of view is one that is divided into what can be described as traditional industries and emerging industries. The traditional industries are the industries like the mining industry, the pastoral industry, fishing and pearling, and we refer to the traditional industries in terms of improving Indigenous engagement to bring about increased social, cultural and physical returns for people on country. The emerging industries are those on the horizon, where Indigenous people could provide proactive input into how those industries emerge—but also to ensure that they provide significant and unprecedented returns for people on country. Importantly the notion of a culture-based economy as we see it is one that is about supporting people to reside on their country rather than moving people off their country into townships. So it’s got an underlying theme of alternative livelihoods to sustain present and future generations of Indigenous people in the north (Morrison in Browning 2006).

The idea of a culture based economy[1], has emerged out of some discussions around the strategic direction that NAILMSA might take towards understanding and facilitating Indigenous engagement in the economy in northern Australia. It seeks synergies among obligations and opportunities in management of land, maintenance of culture and economic development and also seeks to decrease Indigenous reliance on the state, including through commercial enterprise development related to NCRM. Broadly speaking, the idea encompasses:

Over the last 30 years a large proportion of land in Northern Australia has been progressively returned to Indigenous ownership. There are vast tracts of land across the north where Indigenous people form a majority of the public, particularly outside major centers, and where Indigenous institutions predominate (Taylor 2006). In the Northern Territory, approximately 50% of the total land mass, and 85% of the coastline is owned by Indigenous people and around 70% of Indigenous people in the Northern Territory are living on Indigenous owned land (Burgess and Morrison 2007). Return of land title has supported continuation and/or re-establishment of Indigenous settlement and NCRM practices on country. Land ownership and the large and growing proportion of the public that is Indigenous, mean that Indigenous people are – or at least should be - in a position to exert increasing control over planning, development, resource management and research processes, decisions and directions across the north that are more closely aligned to their requirements.